This article won't show you how to install these extensions, but here's a hint. Look in the Tools/ Extension Manager/ menu.

After you install Pro power tools extension, you'll find a new configuration tool in the Tools/Options/ menu. As you can see from the following screenshot, there are lots of tools included in this extension.

Now let's take a look at the new dialog:

Wow, what a difference. The first thing you'll notice is a nicer looking UI. See how there are green icons next to the existing references? Also, on the right side of the screen, there are details about the selected assembly.

There is a handy new sort of dialog at the top of the screen:

There is also a search control in the upper right-hand corner of the dialog. This is invaluable for filtering a large list of assemblies. Check out the results when I typed in the word “interact” in the search box: 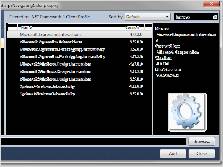 Here is something I've never understood. Visual Studio contains a powerful code editor, but if you are a C# developer, you are missing features that other editors have had for decades. I find it annoying that when I type in an open curly brace the editor doesn't add the closing brace. Same with typing parenthesis (), square brackets [] and other paired characters. But the problem is solved in Power Tools. It automatically adds the closing character.

I can tell you from bitter experience that programmers have strong opinions about whether to use tabs or spaces in their code. But one thing we all agree on is that mixing both in a single document is a travesty. Lucky for us Power Tools provides a mixed Tab/Space tool. When it detects a problem, it shows a small drop-down at the top of your code window.

Finally, let's look at the powerful Tab features in Power Tools. These are known as Tab Well features.

For starters, Power Tools colorizes tabs depending on which project they belong to:

You can specify that you want the tabs sorted alphabetically, and you can make them scrollable too. If you have a large monitor, you might benefit from having vertical tabs. 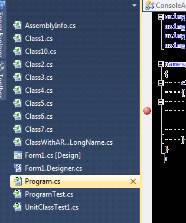 Power Tools adds a red dot to any tab that is open with unsaved changes.

Another favorite feature of mine is the ability to pin a tab. When you hover your mouse over a tab, you'll notice a pushpin button.

Click the pushpin and the tab is added to a new tab row.

There are many more features included in Power Tools. This tool is created by Microsoft and is freely available to add to your copy of Visual Studio 2010.